(All the bakes, all the time)

The Season 1 technical bakes were really quite easy, if you had the recipe in front of you. The first season of GBBO that I watched was season five. When I went back to watch season 1 I thought “are they joking?” The standard was so much lower. I think that a lot of people watched the first season and thought “Well, I bake a lot better than that, I’ll have a go!”

Thus, the Season 2 Technical Bakes are no joke. Even with the recipe and the masterclass videos – wherein Mary and Paul show you exactly how to make the recipes – the recipes have been difficult to execute. (Yeah, I’ve almost finished the Season 2 bakes and am well behind on blogging – much content to follow!)

So, the Battenberg. You may have noticed that the title and the assignment differ. My brother, who judges the bakes, is allergic to walnuts. I adapted this so he could eat it. Yep, it’s not the same, nope, I’m not sorry.

Instant Coffee was the weirdest ingredient I had to get for this, that and margarine (or “baking spread”). The instant coffee adds a full cup worth of coffee flavour without the excess moisture that would mess up the sponge texture.

From here we moved on to a fairly standard sponge mix (that’s cake, America) and a craft project.

I am now confident in my ability to make sure the cake comes out of the pan. Thoroughness is the key. Grease, maybe some flour and  parchment paper. Don’t skimp (my mom was a skimper because her mom – who taught her – was raised in the Depression when skrimping was really just being. I’m learning better ways now. And that has been a short lesson on how poverty interacts with multiple generations of a family long after members of that family are actually poor. /sjwrant) and your cakes will come out!

You can go out and buy a special Battenberg pan. I was not about that.  I am completely willing to buy equipment as I go about my quest, but I am pretty sure I’m not going to be popping out Battenbergs again (spoiler?). Mary Berry, being crafty like ice is cold (I put on my records, she knew all the grooves) shows one how to  use foil backed parchment to separate your pan into two baking chambers.

My pan was 8*8 instead of 7*7, so my Battenbergs were more rectangular than square. No biggie.

Beat up the sponge, then, split it in half and add flavor to each half. Instead of walnuts, I used almonds.  Next time I would toast them to add even more flavour.

I tried to be exact on this part, to get identical sponges. 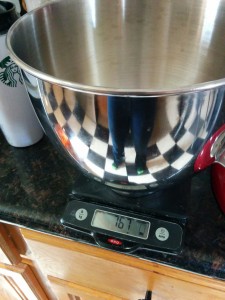 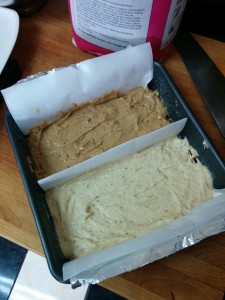 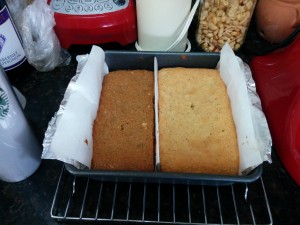 And yet, my sponges were quite different sizes.  That was frustrating. I tried very hard to make them even before baking and it just didn’t happen.  I don’t know if it was the nuts. I got the sponges out, separated them and then went for a run. 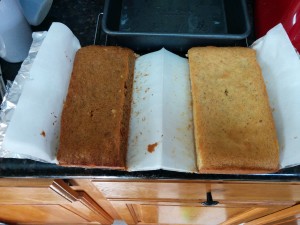 Coming back it was time to assemble!

I mixed up a truly miniscule bit of frosting. It was not enough!! You are meant to use it to stick the pieces of Battenberg together and then coat the outside so the marzipan sticks. There was just not enough of it to do all of that.  The sponge was crumbling when I tried to get the icing layer thinner and by the time I got to trying to stick on the marzipan there was none left.

Marzipan! or Almond Paste? Marzipan! The recipe called for 8 oz of marzipan. The package had seven. I didn’t buy a second package so I would have the right amount and then have six ounces of marzipan left over. It didn’t make a difference.  I had enough to roll out and cover the cake.

Rolling the marzipan and wrapping up the sponges was much easier than I had been anticipating. As a material, marzipan was fun and easy to work with. Paul likes to crimp, so I crimped and added almonds on top.

It looked good! The marzipan was separating from the sides due to the lack of frosting to stick it on.

We sliced it, ate it and… it was really gross. The commercial marzipan was disgustingly sweet. You couldn’t taste much coffee or almond, just sugar. For all that work it was not delicious. I would not make this again, unless I made my own marzipan (which I have done in the mean time and it came out great). If you make this, be selective about your marzipan and I think you will be much happier than I was.

One thought on “Bake On 6 – Coffee & Almond Battenberg”