Another quick info-dump of Relic’s map specifications. This time we’re tossing out the sizes for all maps as of There Is Only War. You’ll notice that there are two sets of sizes listed. The first is the size of the playable area, which is obviously the part of the map where HQs and resources can be located and the limits of where units are able to move. The terrain area (or whatever it’s called) is the actual size of all of the 3-d terrain that’s visible in-game; this has to be bigger than the playable area so that when you scroll to the edge of the map you aren’t looking off into the void.

You can use the sizes given to get a rough idea of just how big to make your map; if you want the time to get to the middle of the map to be about like it is in Angel Gate, for instance, make your map’s playable area 416×416. Note that map size is just a start; Calderis Refinery has one of the biggest playable areas in the game, but still feels cramped to me because of the way it vigorously funnels units around the map.

As a rough rule, I’d say pick a playable area size, then multiply that by 1.5 to get a usable terrain area size. You can go bigger with terrain area size if you want to put in a lot of details outside the playable area; see Argus Desert Gate or Angel Gate for some interesting examples. Seriously, does Angel Gate need all those burning buildings our in the city area past the gate? Can anyone even see those?

I’ve started yet another DoW2 map, and I’m having some scale troubles. It’s hard to keep the map scale in mind while I’m placing things like requisition and power points. in the map editor it feels as though the place must be amazingly crowded, but when I open the map up in the game, it turns out that the whole thing is immense and everything is far apart.

This is actually affecting the entire map – I kinda didn’t mean for it to take so long to get from one side of it to the other. I suppose this is mostly me noobing it up with the world builder. And I guess I can always open the map up in-game and have a look. I could even take a stab at placing a couple of static soldier models around the map for scale reminders, or using the ruler splats you so thoughtfully included.

But to be honest, it’d be much cooler if you just had the world builder generate a little squad of scouts or something and had them run around the map so I could see how long it takes them from the nifty God’s-eye zoomed all the way out view. 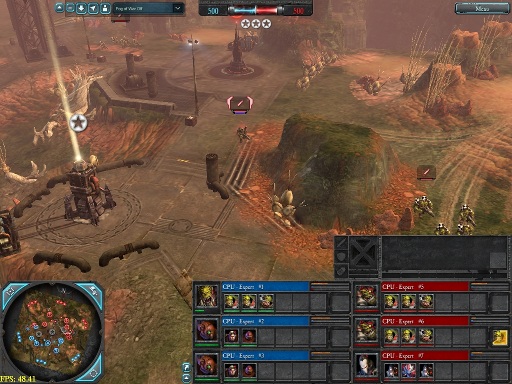 END_OF_DOCUMENT_TOKEN_TO_BE_REPLACED

This isn’t really much of a post, but I’ve been mucking around with the DoW2 map editor to see if I can use it to work on my design chops – “Christ, another blogger and/or game tester who wants to be a game designer?” Yes. Sorry – and I figured I may as well share any results in a public forum.

One of the early things I like to do when I’m working up a map is put down power and requisition points. In fact, it’s the third thing I do, right behind placing bases and positioning victory points. However, it’s occurred to me that I don’t really know how many of each is a good balance. I suppose more points will equal more resources and a faster fight, but too many would lead to clutter and imbalance. With these concerns in mind, I decided to have a look at Relic’s official maps for the game.

The short version is that for 1v1 maps Relic likes 4 or 5 of each, usually with a bit more requisition if you don’t feel like keeping it identical; the 6 requisition points in Green Tooth Gorge are a bit of an outlier. For 2v2, they like 5 of each, maybe 6 for a crowded slugfest map (p.s. I hate you in all your evil forms, Calderis Refinery). For 3v3 Relic likes 6 of each, with 5 in a map that needs lots of room to maneuver and 7 in a really big open map or another ugly sluggathon. Ugly but complete chart of data follows: