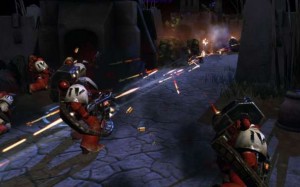 OK, yes, Gearbox of all people bought Homeworld of all things. The Painkiller people bought damn near everything else from THQ. We knew this, we knew this, where the fuck are the space marines?
Oh, wait, this sounds kind of meaty:

“THQ’s now history, but that still leaves Relic, Sega, and Games Workshop to figure out the logistics of bringing Dawn of War back from the brink. And yet, while it won’t necessarily be the easiest thing in the world, Relic game director Quinn Duffy is confident that it can – and probably will – eventually happen.”

Oh, probably. Probably? Is that all you have to offer me? FUCKING PROBABLY?

Dialing it back a bit, here. Let’s not let expectations override the facts, Rob. So Eurogamer interviewed a fellow from Relic, Game Director Quinn Duffy. Mr Duffy doesn’t know who has the Dawn of War IP, or who Games Workshop will choose to work with if the series is continued, but he “hopes” it would be Relic. Ah. Duffy further goes on to essentially say that whatever work was done on Dawn of War 3 to this point will be tossed out and any new DoW will be started from scratch to get back up to pace with current technology.

So the news is that there’s no news on Dawn of War or Relic, but a man whose future depends on those questions is hopeful.

*Yes, I sing a little song in my internal monologue whenever I give my computer a command. Try to pretend you don’t.

One thought on “A Peek Into the Mind of Sonic Rob”