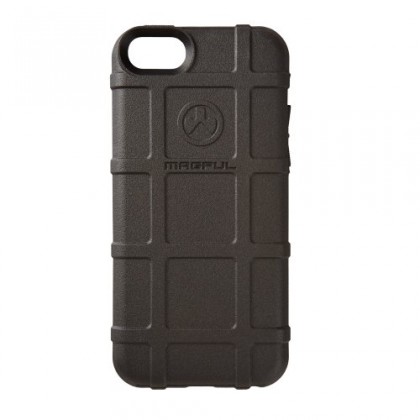 Having finally made the leap to a smart phone earlier this year, I wanted to protect my fancy-ass new pocket computer as best I could. I’m not a coordinated or attentive man when it comes to things in my pockets, so I did some research and settled on the Magpul Bump Case, largely on the strength of a very positive review from The Wirecutter. I’ve been using the Bump for around three months now, and I have some thoughts.

The Bump is a single-piece snap-on case that covers the back and sides of the phone. It doesn’t particularly shield the screen, but the case does have a lip that comes up around the screen on all sides; if you lay the phone face-down on a flat table the screen is a millimeter or so off of the surface. The case has holes for all of your cables and for the phone’s speakers, and it has nice integrated buttons that allow a user to click the volume and power buttons under the case easily.

Does the Bump actually protect your phone? In short, yes. I’ve carried out several accidental drop tests with the Bump: having it slip out of a jacket pocket to land corner-first a tile floor; having it fall from the edge of a sink and hit a different tile floor face-down; and another jacket drop to land on its back on concrete. The bump protected my phone completely through this inadvertently comprehensive gauntlet, and at this point the only thing I wouldn’t trust it to handle would be dropping or crushing the phone on its unprotected screen.

Other than its raw durability, the main selling point of Magpul’s product is the ribbing that runs up and down the sides and back. This is the same sort of pattern that Magpul uses on rifle magazines in order to make them easy to grip when the user is wearing gloves, or when the magazine is wet. In my experience the Bump feels very slightly rubbery, with just enough flexibility to give a good grip. The ribs help with holding the phone securely, so the overall effect is that when I’m looking at a video or making a call I feel as though I have an incredibly stable grasp of my device. The material isn’t actually sticky, so it doesn’t pick up lint in your pocket or anything like that. However, the bump won’t actually grip itself for you, so if you leave it on the edge of a sink (like a dummy) or dump it out of a hoodie pocket while grabbing for your keys (like a dummy), Magpul’s case cannot save you from yourself.

The Bump is available from Magpul for around $30 and only fits iPhones; as usual Amazon has it for somewhat less. There’s also a very similar case from Magpul called the Field that fits a much wider variety of devices, including tablets and Samsung phones.