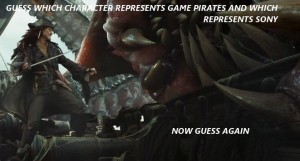 In what Rachel Maddow might label a “holy mackerel” story, news broke a wee way back about Sony finally launching a new PlayStation console in Brazil. Well, new to Brazil, anyway. At launch the console will cost $445 and have “over 14” (i.e. 15) games available to play.

Oh, did I mention? This isn’t the launch of the PS3; this is the PS2 launch in Brazil. Remember when you got your PS2? I got mine with a college financial aid check, back before anyone in the US had ever heard of Al Qaeda.

It’s weird that Sony would be trying to do this now. Legitimate game sales in Brazil tanked back in the 90s when massive sales taxes were laid on game sales. Game companies fled the market, pirates swept in to fill the void, and now over a decade has passed without any serious non-pirate presence in the Brazilian games stores. I honestly don’t get why Sony thinks that this is going to work out well for them with how far things have slid. It’s not like things have turned around lately in some way that makes a console launch auspicious.

I suppose the question is: if Brazil has gone as long as it appears to without a culture of buying games legitimately, how do you change the paradigm there, given that an entire generation grew up with no non-pirate means of playing current-gen games. The Escapist pointed out in March that you can get games for $5-10 at pirate mini malls, and nobody has ever played a PS2, PS3, Xbox, or 360 game in Brazil that wasn’t pirated. What’s worse, Brazil still has a brutal tax on games that’s close to 100% (which probably accounts for at least some of that PS2 launch price). Good luck keeping your game costs competitive with pirate copies while that’s in effect.

I’m sure that game and console makers would like to break the grip of the pirate market in South America, but I’d be really surprised if they manage to do it anytime soon. In our current gen here in the US, they are using a carrot and stick approach. You start by removing value from pirated games: you create DLC that they can’t access, or you make it hard to use them, for instance by requiring games to log in to a server every time they are played a la Steam/EA Online/MMOs. Second, you add perceived value to legitimate copies by lowering their prices competitively (way more common with PC than console games, but I’d be really interested to see a chart that relates Pirate Bay game crack seeder numbers with price levels for individual games over time) or by adding free content that only works once with a legitimate copy (DragonAge and probably many more to come). The download/online based solutions aren’t really viable in South America right now: Brazil is near the head of the pack in regional internet usage, but only 5% of Brazilian households have a broadband connection. For comparison, the US has around 60% broadband penetration, and that puts us behind 19 other countries. ElectroMegaVideoGameopolis (aka South Korea) boasts a broadband connection in 95% of all households; the rest presumably are presently on fire and cannot connect to the internet for the moment. My point being, there is a way to go before Brazil, and the developing world in general, will have the infrastructure to support the copy protection strategies that have been finding success in the US in the wake of wider broadband support.

And as for competing on value, well… How do you compete with a $5 bootleg copy of FIFA 2010? Especially when tariffs mean you can only charge $2.50 retail for your version, and you can’t even offer any free DLC because hardly anyone has a fast internet connection. Oh, and you haven’t released an internet-friendly console yet. Oh, and your customers have been buying games from the pirate mall down the street for the last 15 years because the sales tax on your product drove you out of the country back when Clinton was president.

I’m not saying Sony shouldn’t try here. Maybe they have some strategy that will help; maybe all this time and effort have been used to develop a more pirate-resistant PS2. Even so, they’ve set themselves a tough row to hoe here. If I were them and wanted to break into markets in developing countries, I would work on lobbying governments and telcos in those markets to encourage the spread of broadband and drop taxes back to the other side of the Laffer curve.